Why You Should be Eating Complex Carbs for Breakfast 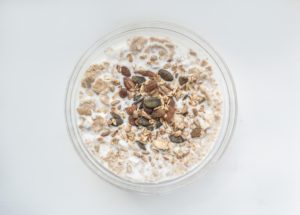 Carbohydrates have a bad reputation, but it’s not necessarily one they’ve earned. Fad diets like Paleo, Atkins and South Beach have fueled a massive dislike of carbs and were primary drivers of the American obsession with going gluten-free, despite the lack of evidence that there are health benefits to doing so (and a growing amount of evidence suggesting that it could be damaging to heart health). Cutting grains out of a diet has become a very popular behavior over the last few decades, particularly among people trying to eat more healthfully or for losing weight.

That said, by cutting carbohydrates out of a meal, it doesn’t necessarily make it healthier. In fact, you might cause yourself to suffer from any of several types of nutrient deficiency by slashing your carbs.

The main problem causing this trend is a lack of understanding of carbs, how they should be eaten and the health and nutritional advantages they offer. Eating complex carbs, particularly for breakfast, can help you to stay full and energized while gaining enough B vitamins, fiber, iron and other essentials.

When your body digests carbohydrates it processes them differently based on what type it is. The first type is glucose, which is the primary source of fuel used by every cell comprising your body. The second type is fructose, which is a rapidly available form of short-term energy. This is the form that may also be stored as body fat if it is not all used.

Carbohydrates themselves come in two different forms, complex and simple. Complex carbs include foods such as whole grains, vegetables, beans and lentils. They’re converted primarily into glucose. This is a process that takes longer and therefore provides consistent energy. Simple carbohydrates are the second form and include foods such as white rice, white bread, soda, candy and other foods made from refined white sugars and flours. They provide a short burst of energy but are notorious for leaving an energy crash behind. Moreover, they often leave us feeling hungry shortly afterward due to a lack of fiber. Consumption of these foods is associated with weight gain. However, certain simple carbs, such as the ones found in fruit, do have fiber. Fiber slows the absorption rate of carbs to prevent the energy spikes and crashes typical of simple carbs.

By choosing complex carbs and limiting simple carbohydrates for breakfast, you’ll give yourself a nutritious meal that will leave you feeling full and that will provide you with lasting energy. These foods will fuel you right from the start of the day and will help you to feel full and energized until your next meal instead of risking the munchies mid-morning and drooping energy levels before lunch.