Everything You Should Know about Trans Fat 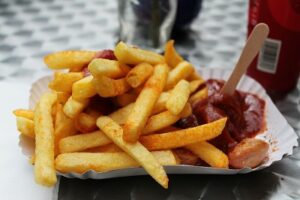 In today’s world, it pays to be informed, especially when it comes to the things you eat. Modern times have made it easier for food manufacturers to cut corners and place harmful additives, preservatives, and chemicals into our favorite dishes. One of the main concerns for this generation is the influx of trans fats into popular recipes. This not-so-welcome change in the way we eat may end up having some serious consequences if we do not do our homework in time.

What Is Trans Fat?

It is important to know that a trans fat (sometimes referred to as a trans fatty acid) is a synthetic ingredient that is easily avoidable. This material is typically created during an industrialized process wherein hydrogen is added to liquid vegetable oil to develop something more solid. Sometimes called “partially hydrogenated oils,” they are unfortunately showing up in many of today’s most popular products.

How Does It Affect the Body?

It is important to become aware of the impact of trans fats on your health in order to make smart food choices. The rule of thumb is that they should be avoided at all costs, especially when you consider the damage they do to your heart.

Because these harmful fatty acids raise a person’s LDL (or “bad”) cholesterol, they also raise that person’s risk of developing heart disease later on in life. On top of that, they actually lower HDL (or “good”) cholesterol, which could trigger a complete reversal of health over time. This risk is such a concern that the FDA has banned food manufacturers from using artificial trans fats without first being granted special approval.

How Can I Avoid Trans Fat?

Even when taking the ban into consideration, this doesn’t mean that they are absent from all foods, only that they have been reduced in their artificial forms.

Staying away from these fats may seem like an imposing task at first, but it is easier than you might think. This is particularly true since the ban went into effect, though it’s still important to remain vigilant. You need to know how to read the labels of the foods you buy, making note of any synonyms for “trans fats,” such as the two mentioned previously. Pay attention to how the food’s ingredients are listed, and ask questions if need be, so that you can make healthier choices at the grocery store and in restaurants.

FDA Bans in the United States

In 2015, the US Food and Drug Administration (FDA) determined that artificial trans fats were unsafe to eat.  At that time, they gave food producers and manufacturers three years to ban them from their products, at a June 18, 2018 deadline. That year, some companies were given an additional year extension for using artificial trans fats in specific circumstances such as industrial baking pan grease, though this was a highly controversial decision. The main criticism was that those companies had already been provided with ample time to find alternatives.

The ban was, in part, due to the research of Harvard TH Chan School of Public Health professor of epidemiology and nutrition Walter Willet’s research, and that of many others to follow.

That research pointed to a direct link between the consumption of artificial trans fats and cholesterol to heart disease. According to a Harvard Medical School publication, Willet predicted that the ban would help to reduce the number of deaths from heart disease in the United States, while easing the instance of dementia, diabetes, and other metabolic diseases. He was quoted in the Washington Post as having been opposed to the extension in the case of industrial baking, but that he accepted it as it was small enough to still be considered an improvement.