Soup Cleanse Diets: Why They Aren’t Worth the Torture 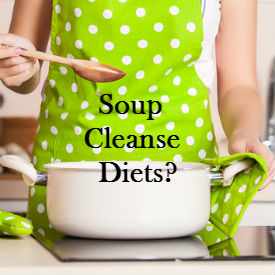 Have you heard about soup cleanse diets that, like other liquid diets, are meant to help your body detoxify itself? Well, it turns out that they really aren’t worth the torture. Rather than depriving yourself of solid foods for a few days, there are better ways to help your body do what it does naturally, which is remove toxins and heal itself.

Continue reading to learn more about the problems that are associated with soup cleanse diets so you don’t end up wasting your time pursuing this weight loss fad.

There’s No Science to Back Them Up
First off, there really isn’t any scientific evidence that supports a liquid cleanse, such as a soup cleanse or a juice cleanse. The benefits that are associated with these types of diets are mostly unproven and merely anecdotal. Also, when it comes to resting the digestive system by not consuming solids, it turns out that your digestive system is designed to work every day on digesting foods. It doesn’t actually need to rest. So instead of spending a lot of money on expensive soup cleanse diets and putting yourself through the torture, focus on eating healthy solid foods. You can mix in healthy juices and soups, but you don’t have to eliminate solids completely to get good results.

There Aren’t Enough Calories
When you go on a soup cleanse, you’re going to be restricting the number of calories that you consume every day. When you don’t consume enough calories for multiple days in a row, your body could move into starvation mode, conserving as many calories as possible while slowing the metabolism. Most of the weight that you lose will likely be water weight, and once you start incorporating solid foods again, you’ll be more likely to indulge too much.

Side Effects Are Common
When people go on soup cleanses, they also tend to experience unwanted side effects that include fatigue, headaches, difficulty concentrating, stomach pain, hunger pangs, and moodiness. Changes in your bowel function, including more frequent visits to the bathroom, are also common.

When you really look at the facts, a soup cleanse isn’t a smart idea. Rather than restricting yourself, you can instead take a healthier approach and consume meals made from whole food ingredients that are packed with nutrients and are naturally low in calories and fat. You can also take a product like FenFast 375 for support to manage weight more easily, especially when you’re exercising on a regular basis as well.