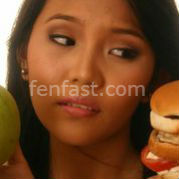 Serious food cravings are often the top concerns voiced by people who are trying to live a healthier lifestyle.  Despite your best efforts to eat a reasonable, tasty and nutritionally balanced meal three times per day – and snacks in between – the temptation presented by sweets, salty foods, or fatty snacks.

Whether you are dieting or not, you can be subject to serious food cravings. There are reasons why this happens that are both physiological and psychological. The physiological part of it is really quite simple.

Understanding why this happens to you can help you to better take control over the effects of food cravings in your life.  You’ll be able to do what it takes to prevent them from happening in the first place.  Moreover, when they do inevitably occur, you’ll often be able to take the steps to overcome them quickly enough that you won’t cave to what they are driving you to eat.

What Do We Crave?

Normally we crave carbs and sugar. We tend to believe that overcoming these cravings occurs when we simply decide not to eat them anymore.  It sounds like it should be easy.  We train ourselves not to have them and then we assume our bodies will play along with our wishes.

However, this is not as simple a feat as we would make it sound. In fact, deciding not to eat something tends to make it even more appealing than it would have been when it was still on our “allowed” list.

The Path to Overcoming Food Cravings

When you are dieting especially, you are bound to have more serious food cravings. This is because the body will get used to essentially waiting for that food to be consumed and stay in an imbalance until it is. Diets that already involve other restrictions can make it even tougher to deal with those temptations.  Foods that you’d usually be drawn to but would easily walk by suddenly become the only thing you can think about.

Psychologically there is comfort eating which are emotional food cravings. When you need to feel better you will crave sugary carbs. It’s not just in the movies that you have a person who has just been dumped that is sitting on a couch consuming large quantities of Haagen Dazs Rocky Road.

It is real and it really can be very serious. It can, in some cases become such a serious issue that you can pack on some pounds. If you aren’t a sugar baby when you are hurting–then you may binge eat and it is normally junk food because of the heavy carb load. Nowadays it is more than that–it is the chemicals they put in the food–like preservatives that are giving us the more serious food cravings.

How to Overcome Serious Food Cravings

Speak to your physician or dietitian/nutritionist and let them know you are having incredible trouble stopping the serious food cravings. In the meantime get with a friend for support and clear out the pantry of any and all junk food and sugar. Now, the secret here is to trick the brain with substitutes like fresh fruit and natural sugar. This way within a few short weeks–we know it sounds like forever, but those serious food cravings will be gone.

Even with that technique, you’ll still need to be patient.  That will help you while the food cravings are actually affecting you.  However, it won’t stop them from coming back.  The key to making sure you won’t be facing repeated temptation that you struggle to overcome is to stick to your goal right from the start.  Don’t give in.

The first stretch will always be the hardest part.  It will be the time in which you will experience the greatest number of cravings and will find them the hardest to overcome.  The first day is usually the hardest for most people.  It will decrease during the second day but will continue to be there for the second and third day.  By the fourth day, you’ll find that they won’t bother you nearly as much, if at all.  You’ll feel energized and less plagued by thoughts of treats you like to have on occasion.

Keeping Your Distance from Sweets

This method works particularly well when you’re typically craving sweet foods.  The longer you avoid the sugary treats, the easier it becomes to avoid them.  That said, if you give in to your cravings, it may start the process over from the start.  It’s important to spend at least three days fully dedicated to the task. After that, try to plan your treats instead of having them in response to an urge.  This way, you’ll train your body and mind that these cravings don’t produce a desired response. The longer you keep it up, the less likely they are to come back.